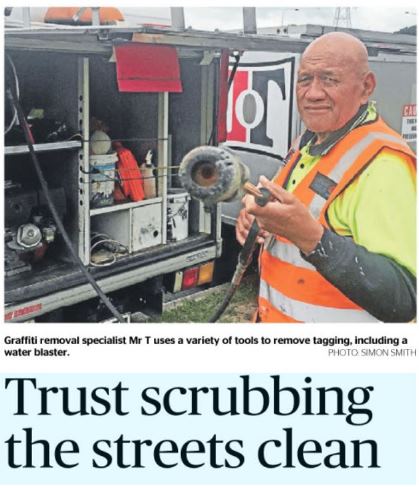 West Aucklanders are now used to any graffiti vandalism they see in the morning being gone by the time they get home. Eight graffiti-removal trucks head out from the Tag Out Trust’s base in New Lynn to clean up about 200 tags every day across the former Waitakere City area.

Managing trustee Iris Donoghue has been with the organization since it emerged out of Keep Waitakere Beautiful in 1996. The Blockhouse Bay resident says tagging still happens but the trust is now on top of it. ‘‘It’s not as bad as when we first started. We used to get the big tags, the bombing.’’ The hotspots at the moment are in Ranui, Henderson and New Lynn as well as anywhere there is public transport, Donoghue says.

‘‘We just want it to go away – we want to be out of a job.’’ Mayor Len Brown recognized the trust’s work for the council with a certificate of appreciation on November 16.
Brown says the city is winning the battle, with the number of tags appearing each year dropping from 125,000 to 94,000 over the two years to mid-2015. More than 98 per cent of them are removed within 24 hours. Donoghue says the vandalism is photographed and uploaded to the Stop Tags database before it is removed.
‘‘It’s quite a specialized job as we need to set the trucks up with a full set of gear – chemical removers, water blaster, grinder and numerous colors of paint,’’ she says.
The Tag Out Trust also tackles the problem in other ways. It runs Adopt a Spot out west and creates at least one mural a year. The latest is at Animal Management West in Henderson (See mural section of website).
The trust also takes about 20 young taggers a week out to repair the damage they have done. ‘‘Some of them say they will never tag again, simply because they see the distress to the residents,’’ she says. ‘‘Others enjoy the company.’’ Tagging is not only an aesthetic problem but also a safety issue, especially for older residents.
‘‘If they get their fence tagged it tells them that somebody has been hanging around their property,’’ Donoghue says.

WRITING ON THE WALL FOR AUCKLAND TAGGING

Auckland is winning its battle against graffiti, says mayor Len Brown – and he has come up with new figures to prove his point.  Mr Brown set up a regionwide graffiti prevention programme as a top priority in 2010, and said, in the last two years, tagging had fallen by a quarter. Yesterday, he brought the various services used by Auckland Council together to give out certificates of appreciation. Other groups battling against graffiti, like the Police, KiwiRail, and the lines company Vector, were also there. 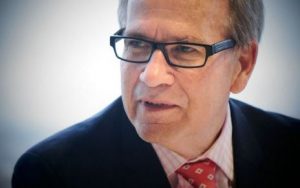 Watching on was Daniel Poumako, 14, who has more than once been caught tagging. He said he did it so he could fit in. “My friends and the people that I was hanging around with – they never said anything, I just copied what they did, and I wanted to be like them. “It just made me feel like that my name was getting out there and known to the streets,” he said.

But Daniel has vowed to stop tagging. He has twice been picked up by Jennings George from the Tag Out Trust, an agency which removes grafffiti. “They do it because of their peers, they also want to do it for the fame. Only a tagger knows the feeling. “They’re probably asking the community, ‘how much do you care enough to even come out and report that tagging’.” Mr George, at the frontline of the fight against graffiti, tried to act as a role model and sounding board for young taggers, he said. “When I meet a young person, I don’t say ‘how did you get here’, because I already know that. “A lot of these kids, they’ve never ever heard the words ‘you’re amazing, you’re awesome’,” he said. Mr George has noticed less graffiti in areas like Sunnyvale in West Auckland, where he said people would even tag grass and hedges.

“I know in our particular area in Beach Haven, when you went there five years ago,Across the city, 125,000 tagging cases were reported in the 2012/13 financial year, which fell to 94,000 in the 2014/15 financial year, Mr Brown said. Most graffiti being reported now was gone within 24 hours or less, he said. Corrie Jamieson manages graffiti removal on the North Shore and said the numbers released by the mayor backed up what he was seeing. There was a lot of graffiti and you didn’t feel safe, you wouldn’t take your familydown there.

“Now I go down there, it takes me half an hour just to get a drink or something, because everyone wants to talk and stop – five years ago it wasn’t like that,” Mr Jamieson said. On the other side of the Harbour Bridge, Gary Holmes from the Glenn Innes Business Association said he had also noticed a significant downward trend.

“I used to take the train from Britomart to Glenn Innes and the route used to be completely covered in graffiti, both on the rail network and on the buildings on the side. “You do that same trip there and there’s no sign of that graffiti… it’s certainly a very notable change,” he said. Further south, the Manukau Beautification Trust told the meeting that five years ago it removed 98,000 square metres of tagging. It said in the last financial year this fell to 58,000 square metres, and that Auckland residents were now far less tolerant of graffiti vandalism. 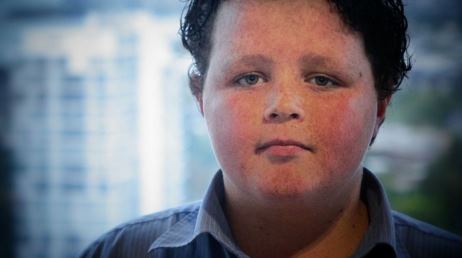 New generation of graffiti vandals in Port Macquarie
February 26th
About 300 to 400 graffiti tags are removed on average per month, out of peak season according to Port Macquarie-Hastings Council statistics.

Parked Vehicles Being Tagged with Graffiti Downtown
February 26th
Jamie Kavanagh returned to his parked car off Water Street to discover graffiti scrawled across the side. It appears someone used a silver paint pen to …

‘Sinister’ graffiti appears across Lurgan estate
February 26th
SDLP representative Ciaran Toman said: “In the early hours on Sunday morning some sinister graffiti have appeared throughout the estate of …

More than spraying paint: Graffiti artist Kenji Chai on creating colourful street art
February 25th
But soon found himself bored by the insipid nature of his job and decided to venture into graffiti in 2006 to freely express his emotions through art. 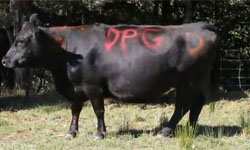 WALL ART FOR EVERYONE

BRIGHTEN UP: Ross Liew and Sparrow Phillips from the Cut Collective finish their latest project.

Street artists appreciate a fine wall and Ross Liew and Sparrow Phillips are no exception.

The Cut Collective artists have just finished their latest project, a 40 metre by 11 metre piece outside New Zealand Management Academies on an industrial stretch in Sylvia Park. “We were so excited about this one,” Mr Phillips says. “A big wall, flat surface, no pipes or drains. The canvas is really pure. It’s as good as they come.” Painting a mural of this scale is a lengthy process, he says.After designing the piece, they spent three days preparing the surface.

The design was projected on the wall at night so they could sketch it. The artists then got out their spray cans and completed the work on Monday. It is inspired by the multicultural student body at the school as well as three of its values – whanau, excellence and respect. Part of being a street artist is knowing that your work won’t last forever, Mr Phillips says. “It’s not just for the client, it’s for everyone. It’s allowing art to be art, not branding it. “A lot of people think of art as a permanent thing.

“We’re coming at it from a different perspective. We never consider it to be there forever.” The two have been working together for 10 years. It has been a struggle to make a career out of their passion, Mr Liew says.The collective artists do commissioned works as well as gallery exhibitions and individual pieces, he says.

“Art is one of the things that falls off the list first for people.”

New Zealand Management Academies spokeswoman Kristin Falconer says the school has received plenty of positive feedback about the work. “It’s just a really lively piece that stands on its own as a piece of art,” she says. “But it also represents some of our values as a school. “It’s a real statement and we’re so proud of it.” Go to cutcollective.co.nz for more information.

PAINT OFF: Volunteers from the Tagout Trust and Henderson’s Church of Jesus Christ of Latter Day Saints will be painting over tagging tomorrow.

It might be the greatest paint-out the west has ever seen.

More than 200 volunteers will descend on West Auckland tomorrow to paint over tagging and graffiti in public areas. The project is the brainchild of the Henderson branch of the Church of Jesus Christ of Latter Day Saints and Tag Out Trust.

Every year the church works with a community group as part of the initiative Mormons Helping Hands. This year the trust will be the beneficiary of the volunteers’ hard work.

Tag Out Trust project leader Terry Davis says tagging is a continuous problem in West Auckland. “We want people to gain a sense of pride and ownership for their area. “If we can pass that on to young kids now, hopefully the message will get across.” He says youth tag for many reasons including to gain notoriety, peer pressure and as an outlet for anger. “The community loses when this happens,” Mr Davis says.

The church’s public affairs director Marilyn Manukia says volunteers want to enjoy the beautiful west environment and this project will help with that. “We don’t want to be a flash in the pan. “We hope to have an ongoing relationship after our initial work this weekend and have some of our members adopt areas to look after. “Having strength in numbers can be a deterrent. “When others see all these people care about their area hopefully they will feel inspired by that.” Volunteers will meet tomorrow at 9am, 7 Harvest Drive before heading to four areas in Henderson and Massey – Sturges Rd, Woodside Rd, Flagstaff Place and Taranui Place – to clean-up the graffiti. The public is welcome to take part and refreshments will be available.